Home » “The Whole Nation Is Suffering Because Of Probe; Probe Has No Meaning For Anybody” – Archbishop To Akeredolu
local news 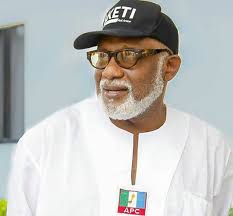 The governor of Ondo state, Rotimi Akeredolu has been urged by the Archbishop of Ondo Province of Anglican Diocese of Ondo State, Rt. Rev Latunji Lasebikan not to be distracted by probing his predecessors.

The cleric gave the advice while delivering a sermon at the thanksgiving service of the governor at St. Andrew’s Cathedral Church, Owo local government area of Ondo State on Sunday, where the 85th birthday of the governor’s mother, Mrs Grace Akeredolu was also marked.

The Bishop urged the governor to concentrate on delivering on all his promises to the  electorates, who voted for him during the election.

Lasebikan said “Probe of governments in the past, what do you make out of it? You get to an office, do your own job.

“President Buhari was to ensure that all those who mismanaged our money are brought to book, what have we got so far?

” The precious time he would have used to do better things has been wasted pursuing people who are unwilling to bend.

“The whole nation is suffering because of probe; probe has no meaning for anybody”.

The Bishop said  ‎”You should pay salaries; many of our people have not been paid, not only in Ondo State but in different parts of Nigeria. It is in East, North and every part of the country.

“It is not good, a labourer is worthy of his wage and government needs to do something that the public will know that the government is taking care of them otherwise people will not respond to the politicians.

Akeredolu, ‎who commended those who attended the occasion, urged the people to always wish themselves good things.

He assured the ‎people of the state that his administration would hit the ground running immediately.

Betrayal: My husband never told me he has three children outside until I discovered. What should I do?

Wedding crasher: See what the first wife does...

Lady Stripped Naked And Tortured By Her Father...

BULL SHARK CAUGHT BY A FISHERMAN IN RIVERS...

President Buhari Is Expected Back In The...