The money, glamour and lifestyle that comes with being a rich and famous football player is one that is enough to blind and distract them from their values and beliefs. They might be tempted to forget the religion or way of life that has been built in them and assisted them in the journey that brought them this far.

Daily family looks at 8 footballers who have held on to their Christianity, in action and in words, they have spread the light and have been good examples to us on why we should never abandon God no matter our position on Earth.

Kaká is one of the best players of his generation. His success at the club and international football level made him one of the eight players to have won the FIFA World Cup, the UEFA Champions League and the Ballon d’Or.

Kaka had success on the pitch of play no doubt, but off the pitch, he gives us the secret to his success;

8 Footballers that represent the Christian Faith (Part 1): Kaka, I belong to Jesus

“It may seem that I have everything,” he says. “Due to my wealth and fame, some people ask why or if I still need Jesus. The answer is simple: I need Jesus every day of my life. His Word, the Bible, tells me that without Him, I can’t do anything. I really believe that. The ability I have to play football and all that has resulted from it are gifts from God. He has given me the talent to use for Him, and I try to improve on it every day.”

Kaka who is radical for Christ till this day goes further stating that;

“Today, I have my ministry through sports, but I play because I have a God-given gift,” he says. “I play because He has perfected the gift He gave me in my life. Jesus said ‘without me, you can do nothing’ and I believe this.”

Read Also: 5 Players whose careers were ruined by their bad attitude

Another Brazilian on the list, the Arsenal, Chelsea, PSG and Brazil fans can testify to his quality even though he cuts a controversial figure off the pitch, David Luiz Moreira Marinho doesn’t joke with his Christian life.

In fact, the 34 years never shies from it, whether it be praying before the start of the match or after the match whether he won or lost, he gave thanks.

Luiz truly is a man of God.

Footballers that represent the Christian Faith: Pienaar; God is great

The former Everton and Tottenham attacker literally carried Jesus on him every time he is on the field of play. He might not have reached the heights of Messi and Ronaldo but he has an enviable career from Dortmund up to the EPL.

In an interview, the dynamic midfielder gives a hint on his faith and why he always celebrated with the ‘God is great’ vest;

‘No-one can force you to believe, though. I just listened at church, and everything made sense. I wear the vest because God truly is great. He is on high. I believe He is with me and the angels are guiding me on the pitch, and it is a way of acknowledging that.

‘There is mickey-taking, inevitably. We lost the other week, and Phil Neville (Captain of Everton at that time) said to me, “Was God great today, Steven?” I don’t let it bother me, though. It goes in one ear and out the other.

Javier Hernández Balcázar also known as Chicharito is the first Mexican to ever play for Manchester United, you don’t get that kind of opportunity just by mere luck according to Chicharito’s Christian faith.

While the rest of us place our destinies in our hands and we also love to think that our plan determines our future, Chicharito on the other hand lives every day at a time and gives his future to God. 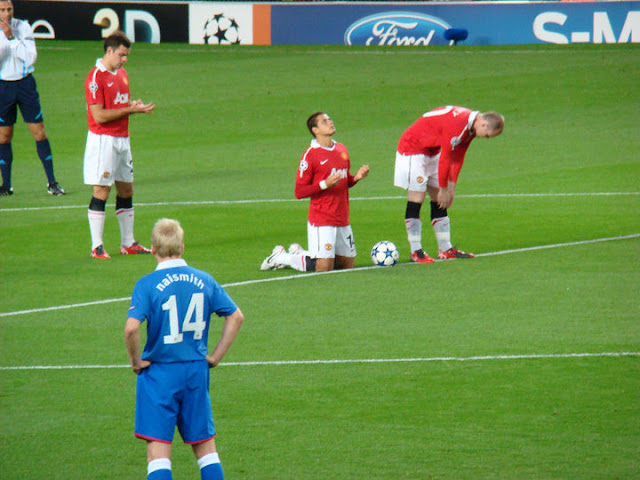 Chicharito prays before the start of every match

In an interview in 2016 on whether his Real Madrid move would be made permanent, the Mexican replied thus;

“…I don’t know where I’ll be, that’s for God to say. I’m trying to enjoy the present. God will decide if I’m at Real Madrid for one year or many.”

On why he is always seen kneeling down to pray before matches; “I like to ask God to take care of me because he gave me the opportunity to play. I talk to God and I let him take care of the health of both teams because the worst things for a sportsman are injuries and there are a lot of accidents on that pitch that nobody wants.”

Feel free to add other suggestions in the comment box or our social media handles;

8 Footballers that represent the Christian Faith (Part 1): KakaChicharito prays before the start of every matchI belong to JesusKakapienaar
0 comment
0
FacebookTwitterPinterestEmail

P. DANIEL is coming to the YOUTHS FIRE...

Top 10 Most Valuable Football Kits In...