In psychology, an attitude is directed towards a person’s set of emotions, beliefs, and behaviours toward a particular object, person, thing, event, job, career, family and so on.

Attitudes are often a result of experience or upbringing, and they possess a powerful influence over a person’s overall behaviour.

Some have even stated that skill and attitude go hand in hand in determining how far a person goes in life. Since skill is acquired through passion, training, learning and education. Attitude on the other hand is acquired through a person’s perception in relation to your environment, home training and vision.

We take a look at some football players who have thrown their careers away, players whose football careers are in oblivion. We discuss 5 Players whose careers were ruined because of their bad attitudes.

Popular for his wonderful shot power and powerful long bursting runs that left defenders chasing shadows in the Seria A. Adriano had it all, he was a standard gauge for what is required to succeed in world football.

But, he’s not on this list because he’s got a good attitude, is he?

Instead of using his talent to good effects like we have seen in the Messi’s and Ronaldo’s of this world; he chooses the path of indiscipline and lacklusterness.

The legendary Luis Figo gives us a picture of this man, he said

“Adriano is the classic example of how to destroy your talent,” Figo added “Talent is secondary though if you do not balance it with dedication and professionalism – two things he completely lacked.”

Adriano’s bad attitude has made him fat and disgustingly unfit, and in the last 4 years in his career, he only played less than 20 matches. Now aged 36, he is without a club.

Years after a lifestyle unsuited to an elite footballer, he spends most of his time at home in Barra da Tijuca, an upper-class region to the west of Rio de Janeiro. Sometimes he visits friends in Vila Cruzeiro, the northern Rio favela where he grew up.

In an interview a few years ago, his former teammate at Inter Milan Javier Zanetti said;

“Adriano had a father who looked after him a lot and kept him in line,” “But then something unimaginable happened: he got a call from Brazil and was told that his father had died.

“I saw him cry. He threw the phone down and started screaming. From that day on, [Inter chairman Massimo] Moratti and I decided to take him in as a brother and protect him.”

But we can he didn’t take their advice as he is seen riding around on scooters with his friends and handing out free Big Macs to local kids in the streets of Brazil.

1 Kings 12:8
But he forsook the counsel of the elders which they had given him…

IF YOU ASK ME IF I AM ONE OF THE BEST STRIKERS IN THE WORLD, I SAY YES BECAUSE I BELIEVE IT. WHEN I SEE THAT OTHER STRIKERS SCORE A LOT OF GOALS, I REALISE I NEED TO SCORE THOSE GOALS. BUT I THINK EVERYTHING ELSE IN MY GAME IS RIGHT. EVEN IF I BELIEVE I CAN STILL IMPROVE. BUT THE GOALS ARE THE LAST THING I NEED TO ADD AND WHEN I DO I BELIEVE I WILL BE THE PLAYER I WANT TO BE. ONE OF THE BEST.

This was Bendtner’s goal and ambition in the year 2010, while his career was still fresh but some weeks ago the striker retires at 33 and no one even noticed, maybe just his family.

Bendtner failed to make his dream to be the world’s best, he didn’t even come close to that achievement. He was involved in a lot of controversies which placed him as an easy target for the ignorant hands and the media bashing around the world.

Bendtner was found guilty in a case of mistreatment of a taxi driver. He assaulted the driver. In the surveillance video of the incident, Bendtner was seen striking the driver in the face and kicking him after an argument over which route the driver was supposed to drive. This former Arsenal man spent 50 days in prison for being found guilty over the acts of torture he committed against a taxi driver in Copenhagen.

The man lives in regret, he stated;

“I had dreams and hopes and I could have done more. There’s definitely some regret I didn’t take my career in a more positive way.

“Looking back definitely [made] me upset because there are moments which were very hurtful and difficult to talk about.

“I became too fond of the lifestyle that came with the money. I want to go back in time and hit that young lad on the head with a hammer.

“Make him understand what a chance it is. That he has something special – something he has to look after.”

1 Peter 5:5: Likewise, you who are younger, be subject to the elders. Clothe yourselves, all of you, with humility toward one another, for “God opposes the proud but gives grace to the humble.”

It came too easy for this man, it’s easy to forget how highly rated Royston Drenthe was at one time. Having become a regular starter for Feyenoord in the Netherlands, he made a big impression at the 2007 U-21 European Championship’s, in which the Netherland’s won the tournament and Drenthe was named best player.

He moved to Madrid for 20million, the world was under his feet and he could do with it whatsoever he pleased. BUT!

This man couldn’t catch a break from his bad attitude, he always had issues with either managers or his teammates. The fame and money got to his head.

“I had a lot of arguments with Moyes at Everton and I didn’t have a good relationship with Mourinho during our short time together at Real Madrid,” he told RTV Rijnmond. 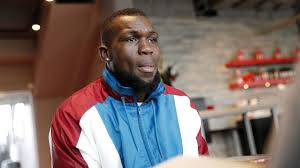 We don’t need to judge Drenthe as he has been the best suitable judge of his bad attitude, he gives us an insight to his downfall and reasons;

“I still love playing football, but I don’t have the motivation for everything around it anymore,” he continued.

“I used to confront David Moyes, thinking I had the right to talk to him like that. But in hindsight, he was so right about me most times,” he told reporters.

“Now I can’t believe I blew it at ­Everton. It is one of the most fantastic clubs in the Premier League. My ­attitude and poor mentality are the reasons I ruined my career there.”

It is to one’s honour to avoid strife, but every fool is quick to quarrel.

This man dribbled till dribbling itself became an obsolete terminology in football. He knew how to mesmerised the fans that even opponents couldn’t wait to cheer to his wonderful tricks and flicks on the football pitch.

One world cup and 2 Balon d’Ors later, he is nowhere to be found.

He left Barcelona when he discovered he couldn’t cope with intense training and team meetings under Guardiola, he wanted to live his life just the way he wanted,

Ronnie loved to club, party, drink and spend his time with lovely Brazillian women and he had all this to his fullest at the expense of his career.

Most fans do not realize that Ronaldinho disappeared from world football at the age where he was supposed to be at his peak.

His career was destroyed because of his glamorous life. He could not control himself when it came to women. In 2014, this Brazilian magician chose to join a Mexican club, Queretaro because he was offered by beautiful women. 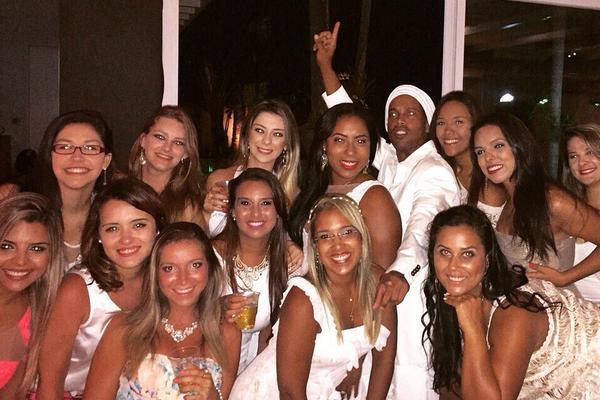 Ronaldinho chose to join a Mexican club, Queretaro because he was offered by beautiful women

Recently he was arrested for using fake passports to enter another country, the former player is so broke you won’t believe how much he made in his career. 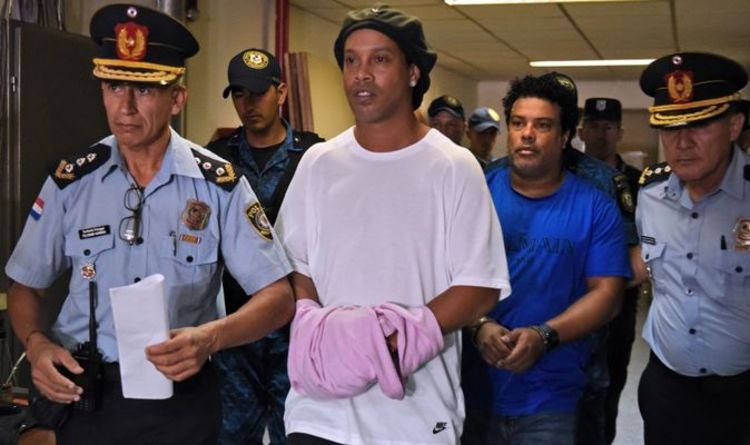 The ex-Barcelona star and his brother were arrested in Paraguay on March 6 for allegedly using fake passports to enter the country.

“Now then, my sons, listen to me; pay attention to what I say…Many are the victims she has brought down; her slain is a mighty throng.”

“…For a prostitute will bring you to poverty…

Read Also: 15 Health tip from C. Ronaldo that we should emulate

He was supposed to be the foundation of the Italian football future, Balotelli decline the expectation with all his bad attitude.

Few players can boast of having the advantage of working with great players and managers at a young age as Mario Balotelli.

His career was not clear as he chose to follow his bad habits such as smoking, getting drunk, and creating other controversies. He went from setting off fireworks inside his own house to clearing the library debts at the University of Manchester,there are countless tales about Balotelli.

His former manager, the great Jose Mourinho gives a stiory that provides insite to how bad Balo’s attitude was;

“I remember one in Kazan. We went to Kazan in the Champions League. In that match all my strikers were injured. No Milito, no Eto’o, I was really in trouble and Mario was the only one.

“Mario gets a yellow card in minute 42, 43. So when I go to the dressing room at half-time, I spend 14 minutes of the 15 speaking only for Mario.

“Mario I cannot change you. I cannot make a change. I don’t have a striker on the bench. Don’t touch anybody. Play only with the ball. When we lose the ball, no reaction. If somebody provokes you, no reaction. If the referee makes a mistake, no reaction. Mario, please.” Mourinho begged

His former manager at Man City tried to apologise for Balotelli’s lack of reaching the destination where his talent should have led;

“I’m very sorry, now he’s 30 and would be at the height of his technical maturity,” Mancini told SportLab. “I’m sorry that he’s in this condition and can’t find a team. He hasn’t done well in recent years.

This is the same Mancini, Balotelli fought at Manchester City. He fought his manager, I mean he literally fought him. 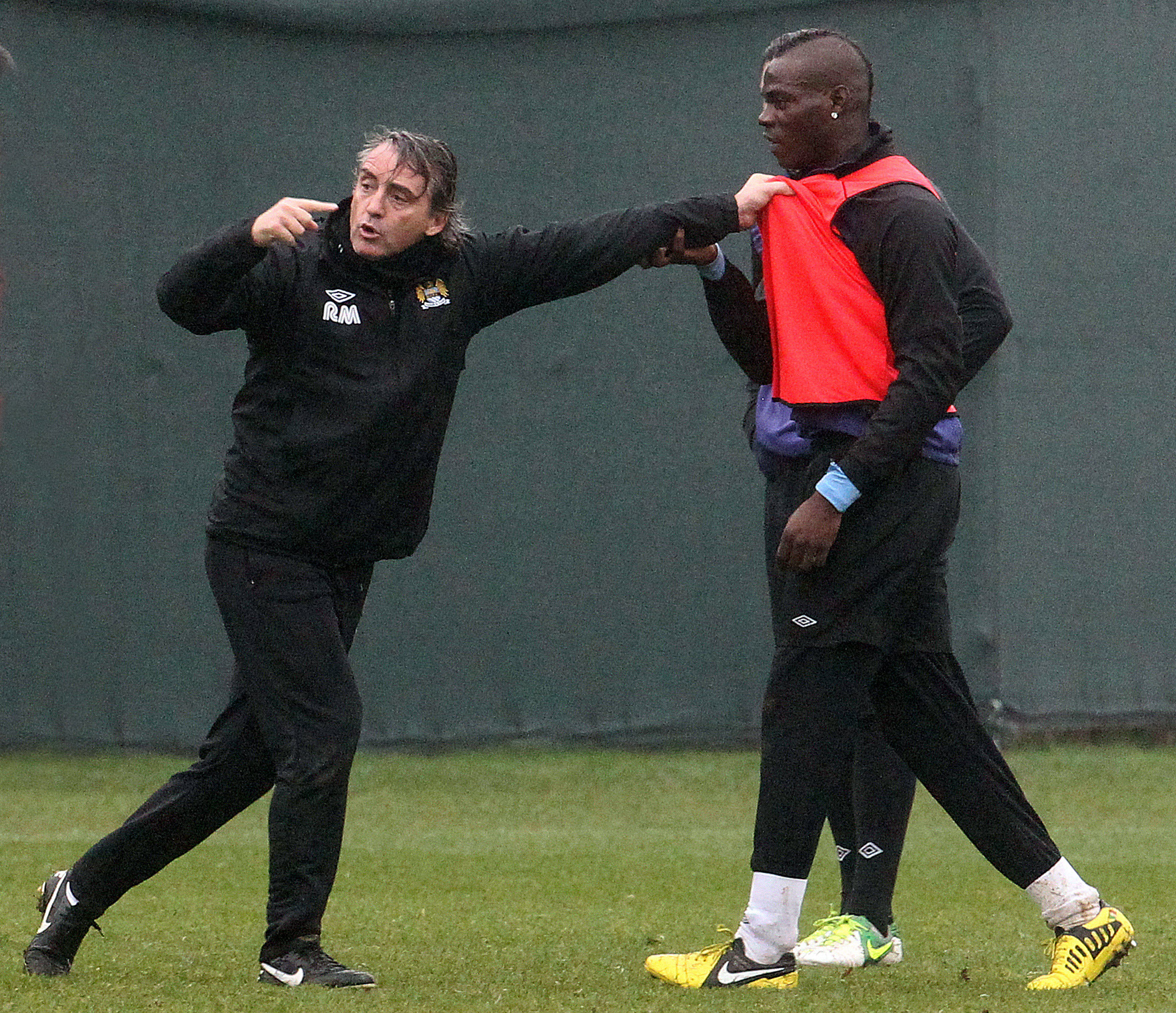 Balotelli in a tussle with Mancini

Balotelli’s career didnt go the way poeple felt it should, he should be competing with the likes of Kane and Aubameyang in top football instead he slipping away in the Seria B club, Monza. He wasted the opportunity given to him.

“Whatever you find to do with your hands, do it with all your might…”