Abducted CAN Chairman Cries Out From Boko Haram Den (Video)

Abducted CAN Chairman Cries Out From Boko Haram Den 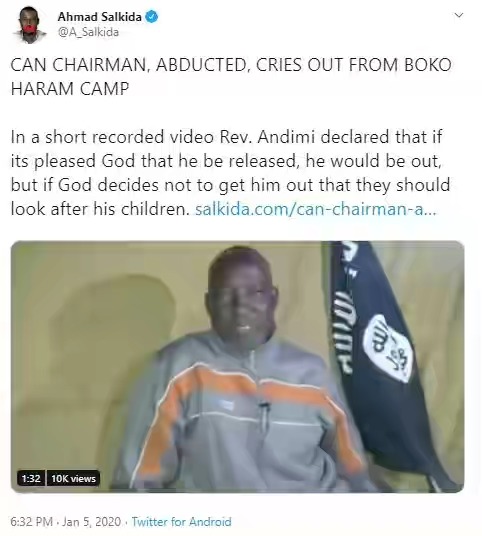 A video of the chairman of Christian Association of Nigeria CAN in Adamawa state, Lawan Andimi appealing to his colleagues and Adamawa State Governor to work towards his safe return has surfaced online.

Journalist Ahmad Salkida uploaded the video on his social media platform and Andimi could be seen and heard pleading with his colleagues in CAN and the Adamawa state governor, Ahmadu Umoru Fintri, to work assidiously towards his safe return.

The abducted CAN Chairman appreciated his abductors for treating him humanly and making provision for blanket cover, decent beddings and good food.

While speaking in both Hausa and English languages inside the video, Lawan Andimi appealed to his colleagues in CAN as well as his family members not to be weary since God’s will must be respected in all of their lives.

He declared that if it pleases God that he be released, he would be out but if God decides not to get him out, his wife should be patient and his colleagues should help look after his children.