A 71-year-old Nigerian man on an Emirates flight to Chicago says the flight crew punched him, and then bound him and taped his mouth shut for eight hours on his trip to reunite with his family. 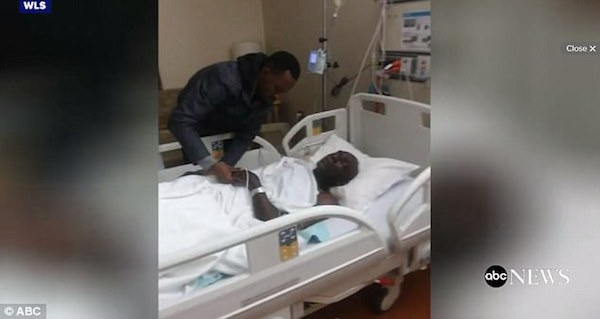 David Ukesone, who said he hadn’t been on a plane in over 35 years, was flying from Nigeria through Dubai.
‘He apparently sits in the wrong seat and was told to change seats by a flight attendant,’ attorney Howard Schaffner told ABC News. ‘He didn’t think he was in the wrong seat and there was an argument and, at some point, he was hit.’
Emirates Airlines, in a statement released Monday, confirmed the incident.
‘Emirates can confirm that a passenger on flight EK235 from Dubai to Chicago on 23 January had to be restrained by cabin crew due to unruly behavior during the flight. The passenger was handed over to the authorities on arrival in Chicago. The safety of our passengers and crew is of the utmost importance and will not be compromised. We would like to take this opportunity to thank the other passengers on the flight for their understanding, in particular the individuals who had assisted our crew during the flight.’
However, his lawyer said, he had no issue traveling from Nigeria to Dubai until he began the second leg of his trip.
Ukesone boarded the flight after his layover in Dubai with the boarding pass assigning him to seat 35D. He was joining his wife who immigrated four months earlier.
His adult son and daughter had also immigrated to the US.
The incident unfolded after Ukesone went to the bathroom and got in the wrong seat after he returned.
His attorney says he sat ‘very close’ to 35D.
Ukseone understands English, but not perfectly. When the argument ensued between himself and the flight crew, his lawyer says, he was very confused.
‘He was asked to move and he wants to take his bag in the overhead compartment with him,’ the attorney said.
‘They told him he was in the wrong seat and they laid hands on him to move him and that’s when everything escalated,’ Schaffner said.
The argument continued to escalate and the flight crew allegedly struck him ‘at least once’ and left a ‘large welt on his face,’ according to his lawyer.
He also claims he was left alone for the remaining eight hours of the flight and was not given food or water.
His attorney alleges his mouth remained taped shut the entire time.
Source: Mailonline
0 comment
0
FacebookTwitterPinterestEmail

Doctor jailed for 175 years over sexual abuse of 150 girls

5 Biblical Reasons to Forgive Your Spouse