A 12-year-Old Indian girl-Suchetha Satish shattered two Guinness World Records at the same time by singing songs in 102 different languages during a concert that lasted 6 hours and 15 minutes.

As reported by odditycentral.com,a seventh-grade student at the Indian High School in Dubai, Suchetha only started preparing to break the world record for singing in most languages in a single concert just over a year ago. She already enjoyed singing in several Indian languages, like Hindi, Malayalam and Tamil, as well as English, but she had always been fascinated by foreign languages, and this was an opportunity to learn as many of them as she could and also leave her mark on the world. On January 25, 2018, she 12-year-old girl stunned the audience at the Indian Consulate in Dubai by singing in a whopping 102 languages, for 6 hours and 15 minutes. 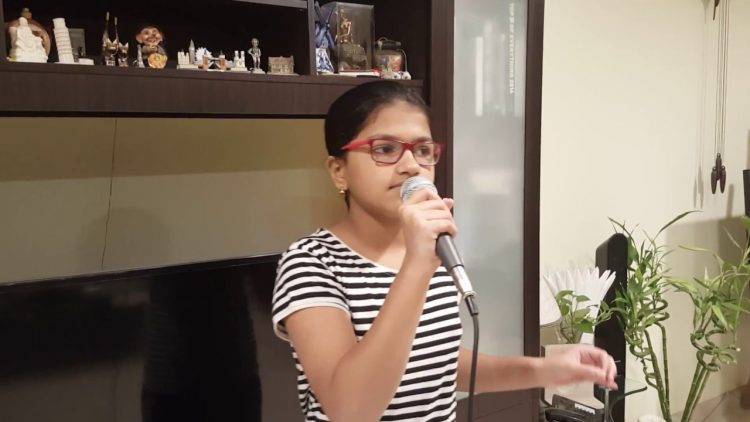 The talented young girl was born into a family of ardent music lovers and began learning Carnatic music when she was four years old. By age eight, Suchetha was already studying Hindustani music as well, but it was only in late 2016 that she started learning songs in foreign languages.

“My first song in a foreign language was in Japanese,” Suchetha told Gulf News, in November 2017. “My father’s friend, a Japanese dermatologist, came to Dubai a year ago. When she came home, she sang a Japanese song. I liked it very much and learnt it.”

The girl then started learning Arabic songs, since she was already studying the language at school, followed by Tagalog, a language spoken by many of the Filipino expats in Dubai, and there was no stopping her after that. She learned new songs in new languages every week, and as she hit double digits, the idea of going for a world record blossomed in her head.

“Usually I take around two hours to learn a song. If it is easy to pronounce, I can learn it fast. If it is not a lengthy song, I can finish in half an hour,” Suchetha said.

Once she’s learned the lyrics to a song, the young record-holder keeps listening to it until she learns it by heart and no longer requires written lyrics to perform it. Songs in French, Hungarian, and German were apparently the most difficult to master, taking Suchetha about two days each. Her favorite songs are the ones in Maori, Armenian and Slovakian.

Suchetha’s original plan was to break the record of fellow countryman Dr Kesiraju Srinivas, aka Ghazal Srinivas, who sang in 76 different languages, back in 2008, by singing songs in 85 languages, in December of last year. That would have been impressive enough for a 12-year-old, but she apparently didn’t think it was ambitious enough, because she spent two more months learning 17 more songs in different languages.

So on January 25, she spent 6 hours and 15 minutes on stage at the Indian Consulate in Dubai performing 102 songs in as many different languages. She thus set a new Guinness record for singing in most different languages in a concert, and for the longest live concert performed by a child, a record previously held by Romanian Andra Gogan, for a 3 hour and 20 minutes performance.

5 Ways to Respect your Husband