Amazing: Nigerian International football star rejoices after the birth of another Child 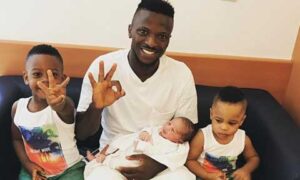 Amazing: Nigerian International football star rejoices after the birth of another Child

The year of 2017 has been a blessing for Super Eagles striker Kayode Olanrewaju as his lovely wife has delivered another bouncing baby boy on Friday, July 7, 2017.
This came just few days after the FK Austria Wien superstar showed his new mansion in Lagos in which he posted the photo of the house on his Facebook page.
The Nigerian footballer Tobi Olarenwaju “Larry” Ayobami Kayode who plays presently for FK Austria Wien was also voted recently as the most valuable player of the just concluded Austrian Bundesliga season.
Olanrewaju, 24, who has earlier been blessed with two sons, took on to social media on Friday, July 7, 2017 to announce the arrival of his new baby boy.

5 ways to be self-disciplined as an entrepreneur

Why I Did Not Play In Europe-Henry...

What George Weah Set To Do For...