When it come to caring for Children and staying with them, women get higher mark in that compare to the men but the reverse is the case in Finland.

As reported by weforum.org,“A lifelong bond is created in everyday moments,” writes Annika Saarikko, Finland’s Minister of Family Affairs and Social Services, in a campaign designed to encourage fathers to take their paternity leave.

In the end, she writes, parental leave lasts for only a brief moment in a decades-long work career. The campaign – which is being rolled out across Finnish media – depicts a burly construction worker happily pushing his baby along in a wheelbarrow.

Such a campaign may be surprising, given Finland’s enviable reputation for gender equality. Indeed, it has just been rated as the third most gender-equal country of the 144 countries analyzed in the Global Gender Gap Report 2017.

But it is this kind of proactivity – and consistent messaging about the importance of fatherhood – that has led Finland into a unique position: it is the only country in the developed world where fathers spend more time than mothers with their school-age children.

The OECD report The Pursuit of Gender Equality shows that Finnish fathers spend an average of eight minutes more a day than Finnish mothers with their school-age children. Eight minutes may not seem much. But it demonstrates that both Finnish mothers and fathers tend to work full time, and that childcare duties are shared.

The chart below shows that Finland is the only country where a square (which represents men) appears above a circle (representing women), showing the minutes of childcare duties performed each day by both sexes.

But it also shows that both mothers and fathers in Finland spend relatively few hours each day with school-age children, since both are normally working full time. And also that women still do the bulk of the childcare for pre-school children in every country, including Finland. 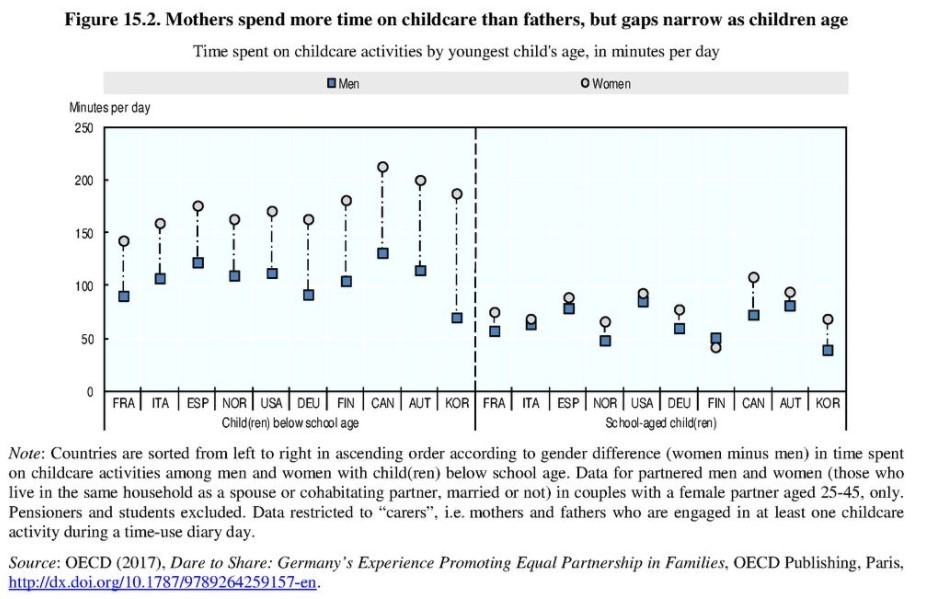 The rights of parents to parental leave – and whether that leave is paid or not – is a crucial part of the equation.

In Finland, the government offers fathers nine weeks of paternity leave, during which they are paid 70% of their salary, while mothers get about four months. On top of all that, couples can share an additional five-plus months of paid parental leave between them. Even after the parental leave period ends, one parent has the right to stay at home until the child’s third birthday – getting paid $528 a month – before returning to the same job.

But – as the following chart shows – social attitude may be more relevant than what is technically allowed.

In both Japan and South Korea, fathers are allowed to take a whole year off work. Perhaps less surprising is the fact that few do it, fearing it might damage their career prospects.

In Nordic countries, by contrast, the OECD says that 40% of fathers take their parental leave. And in Finland alone, the share of fathers taking paid leave has doubled between 2006 and 2013 and is now at 80%.

Which brings us back to Finland’s campaign to encourage more fathers to use their leave.

It is time to show future generations that dads do take care of their children and are willing and able to do this, concludes Saarikko. Finland is proactively trying to prompt the change in social attitudes that is needed to achieve gender equality.

Lady receives best birthday gift ever. What it is will amaze you

What Daddy Showkey Said In This Video...