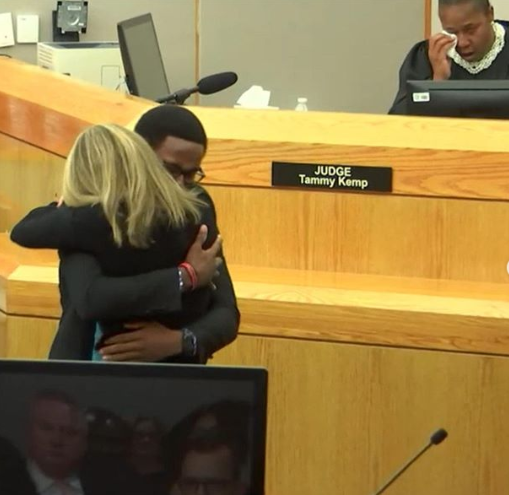 A jury sentenced a former Dallas police officer to 10 years in prison Wednesday for the shooting death of her unarmed neighbor in his home last year. Amber Guyger was convicted of murder the day before by the same jury in the death of Botham Jean.

The sentence was met with boos and jeers by a crowd gathered outside the courtroom. But Jean’s younger brother, Brandt Jean, in a victim impact statement after the sentence, told Guyger he forgave her and loved her as he would any other person. He asked the judge if he could hug Guyger, and the two embraced as Guyger sobbed.

Brandt Jean said Guyger should give her life to Christ, because that’s what his brother would have wanted. Jean was known for his volunteer work and his kindness to others.

Judge Tammy Kemp then got down off the bench, and spoke with Jean’s family members and embraced them. Kemp then spoke with Guyger and gave her a Bible. The judge and Guyger also embraced.

“In 37 years, I’m trying to go back in my memory bank to see if I’ve ever seen anything like that and I don’t think I have,” Creuzot said. “I think that young man was speaking with his heart.”

Creuzot said Brandt Jean’s words brought many in his office and in the courtroom to tears.

How to Maximize Enjoyment this Christmas With...