The Real forward made history with his opener when he prodded home Isco’s cross – becoming the first player to score in 10 consecutive Champions League games. 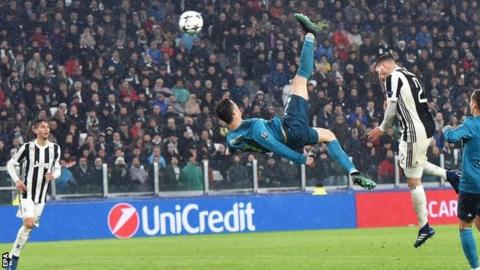 The Italian side had chances to equalise in a decent first half, although Toni Kroos went close to doubling Real’s lead when he hit the crossbar with a 25-yard effort.

Then came one of the great Champions League moments. Dani Carvajal lifted a cross to the Portuguese, who soared in the air and sent a flying acrobatic kick past Gianluigi Buffon, who had no chance.

Such was the brilliance of the strike that Juventus fans stood up to applaud the goal that probably ended their hopes of going through.

It got even worse for the Turin side, who lost last year’s final to Real, as Paulo Dybala was shown a second yellow card for a high boot in the chest of Carvajal.

And Marcelo effectively booked Real’s place in the last four when he played a one-two with Ronaldo before scoring from close range.

At the age of 33, Ronaldo no longer has the pace or much impact minute to minute in a match.

But, reinvented as an orthodox striker, he is in one of the greatest goalscoring streaks in football history – 25 goals in his past 13 games for club and country.

He has now scored 16 goals in his past 10 Champions League games – 14 goals this season and a double in last year’s final against Juventus.

It took him only two minutes and 47 seconds to open the scoring in Turin, when he poked home Isco’s low left-wing cross from six yards out.

He almost had a second when he smashed a ball across goal after good work from Karim Benzema.

His magic moment came in a move which he helped create himself. Giorgio Chiellini poked a ball past his own keeper Buffon, which Ronaldo kept in. He found Lucas Vazquez, whose shot was saved by Buffon. Unfortunately for Juventus, the ball ran to Carvajal, whose cross was dramatically converted by Ronaldo.

The Portuguese, who only touched the ball 49 times in 90 minutes, had two chances for a hat-trick, first when he forced a save from Buffon from 16 yards and then when he shot over when totally unmarked 10 yards out from Vazquez’s cross.

He is not just a goalscorer though, and set up Marcelo’s goal – as well as laying the ball off to Mateo Kovacic, who hit the post.

Meanwhile, Sevilla was defeated 1-2 by their visitor Bayern Munich

70-Year-Old Man Caught Raping 10-Year-Old Girl, What the Youth Did Will Shock You

How Enyeama motivated me when I had...