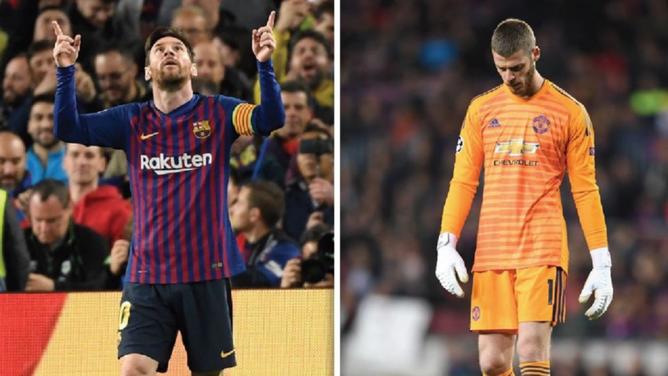 Lionel Messi pounced on two Manchester United mistakes to score twice and end their hopes of another Camp Nou comeback as Barcelona breezed into the Champions League semi-finals on Tuesday.

After an excellent start, United were undone twice in four minutes by Messi, who first nicked the ball off the careless Ashley Young and then watched as a weak shot from distance squirmed underneath David de Gea. 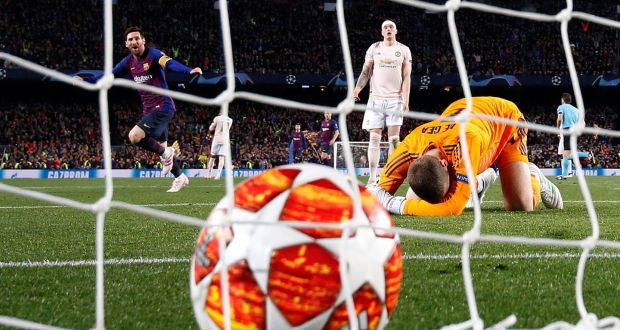 Philippe Coutinho, in perhaps his best performance of the season, added a third with a curling effort into the top corner and by the end, an outclassed United might have been relieved the score was not more traumatic than 3-0, 4-0 on aggregate.
A dizzying opening spell, in which Marcus Rashford had hit the crossbar, was long-forgotten, even if it could offer Barcelona’s next opponents some encouragement.

Liverpool, who take a 2-0 lead to Porto on Wednesday, are the most likely obstacle between Barca and their first Champions League final since they last won this tournament in 2015. Mohamed Salah and Sadio Mane might feel encouraged.

Instead, United’s pair of early errors made this another night about Messi and ensured any faint hopes of repeating the comeback against Paris Saint-Germain, or even the famous 1999 rescue act against Bayern Munich, on this same pitch, were dashed.

Messi now has his 109th and 110th Champions League goals and, potentially, three extra matches to reduce the gap on Cristiano Ronaldo’s 126, after Juventus were dumped out by Ajax. Barcelona’s fans celebrated that too.

United’s coach Ole Gunnar Solskjaer had urged his strikers to be more lethal here but it felt ominous that even before kick-off, Rashford, Anthony Martial, Romelu Lukaku and Alexis Sanchez had hit 42 goals this season, while Messi on his own had 43.

Around an hour before kick-off, Alex Ferguson was on the side of the pitch, shaking hands with Ryan Giggs and sharing words with Solskjaer, the scorer of that goal against Munich here 20 years ago.

They could have hardly have asked for a better start. United were brilliant for eight minutes and could have been ahead within 30 seconds as Rashford raced onto a curving Paul Pogba pass and toed away a shot, which Marc-Andre ter Stegen bravely left to graze his own crossbar.

– Magic Messi –
Barca were flustered, so much so the crowd even cheered with relief when Arthur Melo played his team’s first convincing pass.

Then, Barcelona had their own eight-minute flurry as United almost conceded a penalty, ruled out after Fred took the ball before bringing down Ivan Rakitic, and then did concede, twice, to Messi.

Both could have been avoided, even if Young’s turn on the edge of his own box was punished in devastating fashion. Young lunged in to atone for his mistake but Messi skipped away from him, poked it through Fred’s legs and then whipped the ball past into the corner.

The second was simpler. Fred and Scott McTominay closed in on Coutinho and the ball spilled out to Messi, whose dribbling shot with his right foot should have drawn a routine save. Instead, De Gea let is squirm under his body for 2-0.

Pogba lashed out at the increasingly influential Arthur and Barca could have had a third before half-time, De Gea scrambling across to save on the line when Sergi Roberto should have finished.

Messi could have had his hat-trick too after Luis Suarez found him with a superb cutback and there was an almost comical sequence in the second half when the Argentinian played with his United chasers before finally being bundled over by McTominay.

Rashford might have made it interesting if he had controlled Pogba’s ball over the top but Barcelona were in exhibition mode, helped by a vintage Coutinho curler after he had cut inside from the left.

Messi even attempted a bicycle kick and there were celebrations from the home fans when news went round that Ajax had taken the lead in Turin. They believe this is their year.
Champions League semi-final match-ups:

— Final on June 1 at the Wanda Metropolitano in Madrid