The Lagos State Government has obtained a court order stopping the Ikoyi Registry from conducting marriages. 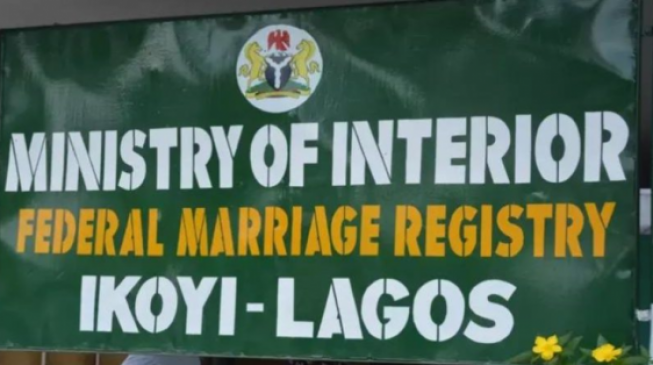 The judgment delivered by Professor Chuka Aunstine Obiozor with the reference number SUIT NO: FHC/L/CS/1760/16 and which took effect on Monday 30th April 2018, reaffirmed that all the marriage registries in the Local Government and Local Council Development Areas in Lagos are the authentic and legally-binding government division established to carry out such function in the state.

The Lagos state government had earlier argued that it is illegal for the Federal Government owned registry to conduct marriages.

The Government also stated that it is the legal right of registries in the Local Government and Local Council Development Areas to carry out the function.

Speaking on the issue, the Commissioner for Local Government and Community Affairs, Muslim Folami, said that the judgement of the court is binding on every organisation and institution in the state, including the Embassies.

Also, the President for Marriage Registrars in all LGs/LCDAs in Lagos state, Deji Sokeye, in his remark, said that a similar judgement was given by a court in 2004, but it was ignored by the Federal Government.

Sokeye revealed that the issue affected the revenue of most local governments in the state.

According to the Commissioner for Local Government and Community Affairs, the judgment will be communicated to all the embassies in the state.

Folami said that there will also be a sensitization campaign to inform all the registries in the state.

He said “We are going to use the five divisions across the state to sensitize our people and inform them about this latest development. From Epe to Ikorodu, Badagry, Ikeja and Lagos Island. The sensitization walk which we embarked on today is also a way of creating awareness and letting the people know of this latest development.”

The commissioner said this at a press conference which he held today, Thursday, May 17, 2018, after the court hearing.

Amazing! See Slave Who Has Answers To All Calculations Faster Than Calculator