Home » England defeats Panama, secures place in round of 16
Sports

England defeats Panama, secures place in round of 16

England defeats Panama, secures a place in the round of 16

England booked their place in the last 16 of the World Cup with a 6-1 drubbing of Panama in the Nizhny Novgorod Stadium and will now take on Belgium in a mouth-watering shoot-out to decide who tops Group G. 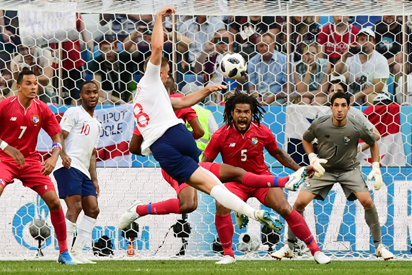 On Sunday, Gareth Southgate’s side were presented with an opportunity to take some pot shots at fish in a canal as Panama, who started brightly enough, wilted under a sustained first-half assault that reaped five England goals, which marked only the fifth time in the history of the tournament that a team had rattled in that number in the opening 45 minutes of a game.

Marking proved to be Panama’s Achilles heel: four of England’s goals came from set-pieces with two dispatched from 12 yards by Harry Kane as Panama’s defenders attempted to wrestle their opponents to the turf every time an opposition player stood over a stationary ball.

John Stones got the rout underway with a bullet header from a corner before Kane, who moved to the top of the Golden Boot standings with a hat-trick, hammered in the first of his two penalties on 21 minutes. Jesse Lingard and Raheem Sterling combined to produce England’s third, a glorious strike from the edge of the area by the Manchester United forward after a one-two with his club rival giving Panama keeper Jaime Penedo no chance.

England then turned on the style with a training ground routine from an innocuous-looking free-kick, Henderson working it to Kane, who nodded back across to Sterling to head home. Penedo prevented the Manchester City forward from getting on the score sheet but Stones arrived unmarked at the back post to finish the job for his second of the game.

Moments later Kane was standing over the penalty spot again after being hauled down in the area and duly dispatched another unstoppable delivery into the same corner.

After the break, England took their feet off the pedal but added a bizarre sixth when Ruben Loftus-Cheek’s effort clipped Kane’s heel and looped past a stranded Penedo for the Spurs striker’s hat-trick.

Panama could have been forgiven for letting their heads drop at that point; it seemed nothing would fall kindly for Los Canaleros. But the travelling support for Hernán Gómez’s side had their moment in the sun in the 77th minute when captain Felipe Baloy, who had recently joined the fray from the bench, met a delicious out-swinging free kick to crack a first-time effort past Jordan Pickford for the first World Cup goal in Panama’s history.

England will now take on Belgium in the final group game with both sides locked on six points and a goal difference of plus six. If that encounter ends in a draw the two sides’ fair play record will decide who tops the group, and if that is all-square at the end of the 90 minutes it will go to the drawing of lots.

My wife will kill me if Super...