An aged Canadian couple are not happy after realising they will be celebrating Christmas separately for the first time in 70 years. 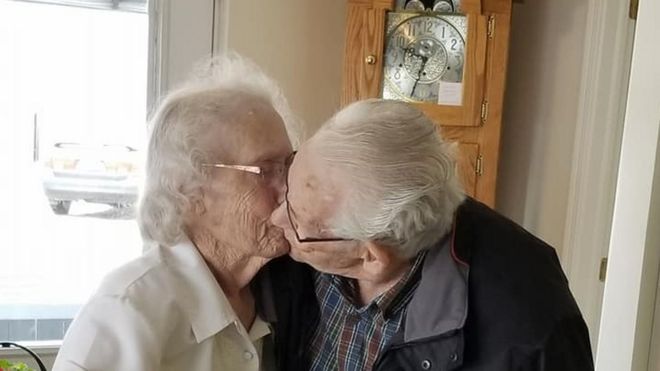 The aged husband Herbert Goodine, 91, was told he must leave the long-term care facility where he lives with his wife Audrey Goodine, 89, and move into a nursing home.

According to a BBC report the facility in Perth-Andover, New Brunswick, told the couple on Friday that he must move that weekend.

The wife was reportedly weeping according to the couple’s daughter Dianne Phillips who wrote on her Facebook page on Sunday.

“When talking to my parents yesterday I listened to my mother weep and I could hear my father in the background,” their daughter Dianne Phillips wrote on Facebook on Sunday.

“My mother said, ‘Christmas is over for us now and this is the worst Christmas that we will ever have. Why could they not have waited till after the holidays?'”

Mrs Phillips said she received a call on Friday from the provincial department that oversees long-term care saying that her father, whose health has declined recently, would have to be moved to a home with more advanced care.

Mrs Phillips said she received a call on Friday from the provincial department that oversees long-term care saying that her father, whose health has declined recently, would have to be moved to a home with more advanced care.

She says that when she was not immediately able to make a decision, the department “forced them to make the decision on their own.”

She said her requests to delay the move by one week, so they could spend Christmas together, were denied.

Meanwhile, a representative of the Long-Term Care Home has also responded on Facebook.

“Once a resident is beyond our level and social development has reassessed to determine their level, I have to follow the rules and regulations set by the government.

“In fact, it’s against the law for me to not follow the rules and I could lose my licence. At this point the decision has been made and it is out of my hands.”

Wedding without debt, marriage without sorry (a must read)