The Governor’s aide who took his celebration to Facebook, shared photos of himself kneeling down with his hands raised.

He also prayed for the souls of those who lost their lives in the South-East to find rest.

TO GOD BE THE GLORY. MAY THE SOULS OF HUNDREDS OF YOUNG MEN WHO LOST THEIR LIVES IN THE SOUTHEAST REST IN PERFECT PEACE. AMEN! AN ENDLESS ALLELUIA!!! 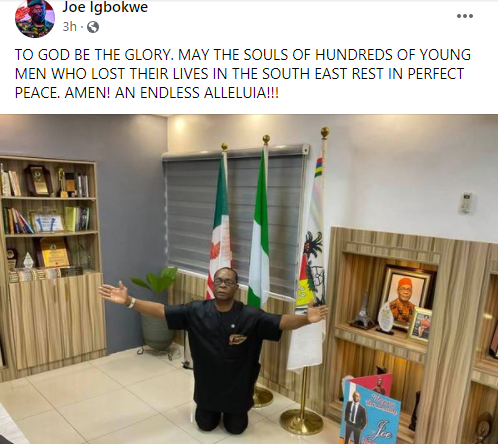 Igbokwe who has never been a fan of Nnamdi Kanu has beforehand made critical comments of the antics of IPOB and Nnamdi Kanu’s mission for the Igbos.

According to him, “My attention has been drawn to a useless radio broadcast made by the leader of IPOB, Nnamdi Kanu, where he mandated his followers to cut off my head wherever they see me.
“I want to use this opportunity to call on the Inspector General of Police and the Federal government to hold Nnamdi Kanu responsible if anything should happen to me.
“Nnamdi Kanu who is a well-known terrorist in the whole world should know that he can never in his entire life come back to Nigeria again forever and ever and if he feels that he is man enough, he should dare.
“All to thanks to Gov Nyesom Wike and the entire Eastern Governors for proscribing IPOB and Nnamdi Kanu a terrorist group. That is to tell the whole world that Nnamdi Kanu is an internationally recognized criminal and will soon be dealt with severely wherever he is according to the provisions of the law.
“Same way, he ordered the crisis in Lekki, is the same way he ordered the crisis in Rivers State and virtually every other part of the country. The blood of the innocent citizens he killed in Lekki and Rivers will forever avenge.
“He was attacking me because I did a video telling the whole world the type of confusion and crisis Nnamdi Kanu is busy creating everywhere in our peaceful nation which went viral and automatically he started losing followers, he then resulted to threat and attack my person.
“I call on well-meaning Nigerians, especially the youths to overlook Nnamdi Kanu and his terrorism in order not to become a victim of bad omen because there’s an adage, that says one-day Monkey go market e no go return,” he said