Home » He has been sleeping with me since I was 13-Years-Old. Girl Accuses Father
News

He has been sleeping with me since I was 13-Years-Old. Girl Accuses Father 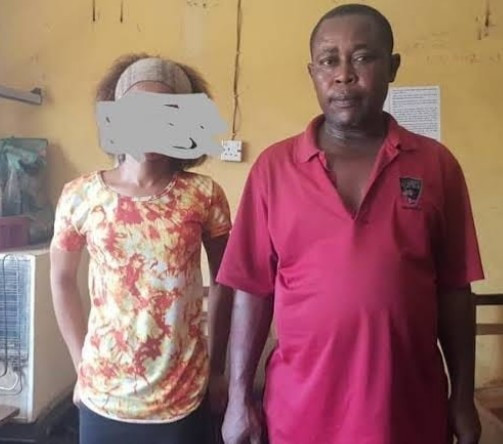 The 15-year-old girl whose father was arrested for raping her for two years and passing her to his friends (read here), has spoken out about her ordeal.

In an interview with Channels TV, the teenager said she used to live with her mother’s sister in the village. However, she said that her father came to take her when she was 13 years.

“Since that 13 years, he has been sleeping with me up till now.

“He start like this, when I was sleeping, he romanced me. I was asking ‘Ahn ahn. What is the problem?’ He said that nothing, he just wants me to know that I am his daughter, that he’s not going to do anything bad to me. I know said ‘no problem, since it’s like that.’ We now played that time.”

She adds: “The next day, I was not feeling fine so he used me.”

She said that from then, he kept raping her whenever he wanted and whenever she refused, he would beat her up until she was too weak to scream.

She added: “And he did not used to give me chance for me to move and tell people ‘see what is happening’. He normally threaten me.”

She continued: “The times that his friends came to our house, maybe, suddenly, they do not go that day and they want to sleep, he’ll ask me to go so that they will use me. If I refuse, he will beat me. But I allowed some people to use me, three of them.”

“They’ve arrested him, at least I’ve have some peace now (sic), ” she added.

The teenager said her mother has now told her that she left her father because he used to beat her everyday, but the last straw that made her leave the marriage was when he tried to rape her sister.

The girl said she was saved from her father after she told her landlady and the landlady, in turn, told people in position to help her.

The 44-year-old father, named Chinomso Okonkwo who resides in Orji, Owerri, Imo state, said he doesn’t know what came over him. He admitted that he raped his daughter but said it happened only once. He said they were “just playing” the other times and that they play well like father and daughter.

Adeboye Reacts To Speaking With Tinubu Over...