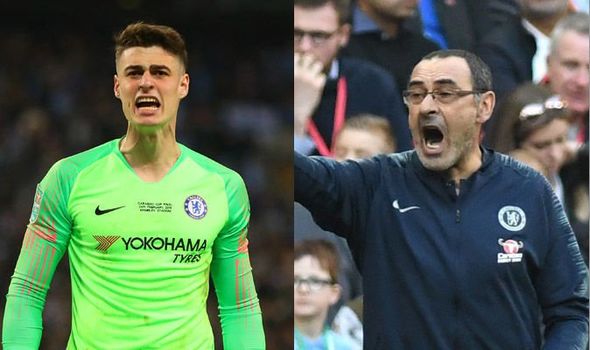 After refusing to be substituted off in Chelsea’s 2019 League Cup final defeat to Manchester City, goalkeeper Kepa Arrizabalaga has apologized to former boss Maurizio Sarri.

Kepa, who moved to Stamford Bridge from Athletic Bilbao for £71 million in 2018, became the world’s most expensive goalkeeper, has had mixed success in west London, with the nadir of his tenure likely coming in that Wembley showpiece.

Read Also: Ronaldo Or Messi – Who Deserves The Balon D’Or This Year?

Sarri led Chelsea to Europa League triumph, defeating London rivals Arsenal and a League Cup final appearance against Pep Guardiola’s Manchester City in his sole season at the club in 2018/19.

With the game still 0-0 in extra time, Kepa went down with an apparent injury, forcing Sarri to turn to Willy Caballero. However, as the substitution was about to take place, Kepa defied his manager’s orders and stayed on the pitch, causing apparent consternation among Sarri’s players.

The Spaniard finished the game in goal and saved a penalty in the shootout as his side lost 4-3 from 12 yards, but his reputation was ruined by the incident in extra time, which he has now attempted to repair by presenting his version of events from the Wembley drama.

Kepa, explained: “I tried to signal that I was OK, that I wasn’t injured. But we were at Wembley in front of more than 80,000 people, so of course, Sarri didn’t understand me.

“When the fourth official raised the board, clearly I should have come off, and I’m sorry I didn’t.

“I was wrong, and I am sorry for everyone who was involved: for Maurizio Sarri, who it seemed like I had undermined in public; for Willy (Caballero), a teammate and a great professional; and for all my teammates and Chelsea fans who had to put up with everything – all the noise that was generated during the game and then in the days after.”

He continued: “For the next three or four days it didn’t stop.

“It was overwhelming. And clearly, most people who saw the pictures thought that I had disrespected Maurizio (Sarri).

“I felt misunderstood because it had never been my intention to snub the coach. I had only tried to tell him I was I tried to explain this to the press, but I couldn’t.”

5 Things you need to accept about your girlfriend