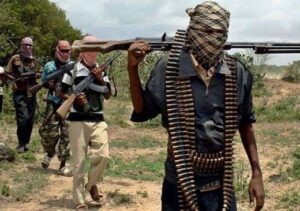 Fourteen (14) passengers in a 14-seater bus traveling from Warri in Delta State en route Port-Harcourt have been kidnapped by gunmen at Rumoji near Port-Harcourt and the kidnappers are now demanding a ransom of one million Naira to secure the release of each passenger, bringing the total ransom demanded to 14 million Naira.

The 14 passengers kidnapped had been traveling on Monday onboard a 14-seater bus owned by one of the popular transport companies (name withheld) when they were waylaid by the gunmen. The entire passengers onboard the bus were taken captive.

The bus was later recovered by a security agency connected to the transport company just where the incident happened.

Families of the kidnapped passengers were later contacted by the kidnappers, asking for a ransom of 1 million Naira for each victim.

However, from recent information gathered, and following intensive negotiations, it was reportedly reduced to N100,000 for each victim.

Security agencies are reportedly carrying out investigations that will ensure the victims are released unharmed. The owner of the transport company is reportedly also doing all he can to ensure their release.