The fire at the palace of the Oba of Lagos, Rilwan Akiolu, on Tuesday afternoon affected a section of the palace.

Ibrahim Farinloye, the spokesperson of the National Emergency Management Authority, NEMA, said the fire was quickly nipped in the bud by the various emergency agencies on ground. “The cause of the fire could not be ascertained immediately,” he stated. “But it has been put off by the combined efforts of federal fire service and state fire service,” he added. 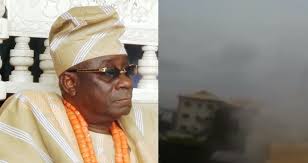 Daily family gathered that some officials of Lagos State Government (LASG) on Wednesday inspected the burnt portion of Iga Iduganran, the palace of the Oba of Lagos, Rilwan Akiolu, on Lagos Island.

According to reliable source within the palace disclosed this to the News Agency of Nigeria (NAN) correspondent, who visited the palace.

The source said that the fire affected a section of the new palace building and not the old one where traditional artefacts and relics are kept.

“A little portion of the new palace was affected by the fire outbreak but the ancient relics are still intact as they are kept at the former (old) palace.

“The Lagos State Government officials visited the palace this morning and had seen the burnt portion.

“I think it is the responsibility of the Lagos State Government to fix whatever was destroyed by the fire,’’ the source said.

It was also gathered that what could have degenerated into an inferno at about 1:25 p.m. was swiftly controlled by officials of the fire services in the state.