Romelu Lukaku scored on his league debut for United. It was a simple goal, whacked in off the post from 10 yards. 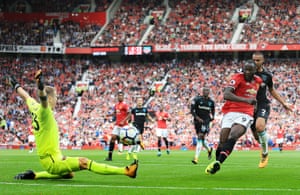 Goooooooal…… Romelu Lukaku is currently on fire. He just scored the second goal for the Red Devil.