The police paraded 36 suspects on Wednesday, including a female, in connection with various crimes in different locations in the country. 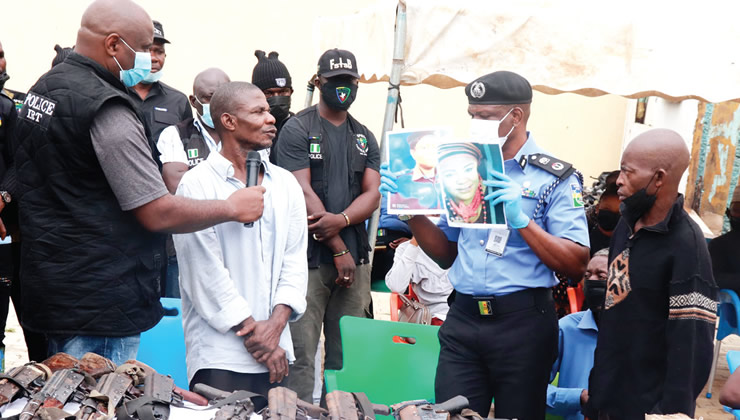 The suspects were arrested for reportedly committing crimes that ranged from armed robbery, homicide and kidnapping to rape, car theft and unlawful possession of arms etc.

Read Also: Police resolve the case of men who kill friend because of N385,000 in Zaria

Christopher Akpan, 54, was among those paraded as an alleged killer of a 45-year-old National Security and Civil Defence Corps officer, who was identified as Josephine Cynthia.

Mba said, “Akpan had promised to marry Josephine. In the course of the relationship, a lot of financial dealings took place and it is believed Josephine handed a large chunk of money to Akpan.

“Between December 19 and 20, 2019, she visited her lover who lured her to the house of a native doctor, Rafiu Afolabi, 67, in Benue, where she was murdered and her body buried in a shallow grave in the forest.

“Akpan promised to pay Afolabi N5m out of the N14m he had collected from Josephine. It took intense effort and massive follow-up by the Intelligence Response Squad before the crime was uncovered.”

Akpan was however in denial about murdering Josephine, stating that he had planned to marry her between December 28 and 29.

Another Prince Reuben, 27, who was on parade, was accused of kidnapping, raping, robbing, killing and mutilating the body of one Joy Saturday, a mother of four.

Reuben confirmed his involvement in the crime.

5 Major Signs You Are the Woman of His Dreams

Presidential Candidate Calls for Postponement of the...