Man Pours Acid on Wife on Women’s Day. Reason Will Shock You

Man Pours Acid on Wife on Women’s Day. Reason Will Shock You

A man poured acid on his sleeping wife on International Women’s Day because she gave birth to a baby girl and he wanted a boy. 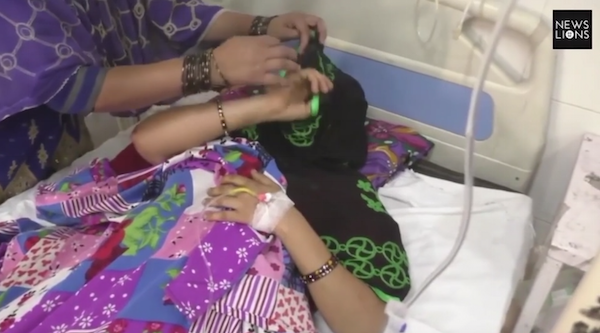 Farah, 25, was severely burned in the alleged attack by Siraj, also known as Bhura, in the town of Moradabad near New Delhi on Monday.
He accused her of failing to fulfill his demand for a dowry and not delivering him a male child.
The 32-year-old is wanted for voluntarily causing grievous bodily harm using acid and is the subject of a police manhunt.
Farah was rushed to the district hospital after the cowardly attack in a serious condition with burns to her face, hands, and abdomen.
Her sister Nusrat Jahan said the young woman married the labour contractor eight years ago, but they began to fight in the past year when he demanded a dowry.
She said the recent birth of Farah’s second daughter was the trigger for the alleged acid attack.
Farah said her husband’s family began to give her a hard time after she gave birth to her first daughter, and later escalated to beating her.
‘After the birth of the first girl, my in-laws started to target me as if I deliberately delivered a baby girl,’ he said.
‘The harassment kept intensifying as time passed by. For the past one year, things had become really bad.’
Farah said Siraj, under pressure from his family, would demand she go to her parents and get money to give to them.
‘When I didn’t oblige them, they started to beat me up. It come to a head when my second daughter was born,’ she said.
‘I was trying to live with the daily dose of torture thinking about the wellbeing of my daughters. I was wondering if I part ways from Siraj who would provide for my two daughters and myself.
‘But I could never imagine that he would go to the extent of pouring acid on me. I won’t forgive him for this ever.’
Source: DailyMail
Follow us on Facebook – Dailyfamily.ng, Twitter – @DailyfamilyNG, Whatsapp +2348188889427, BBM PIN D86722A7 and Instagram @dailyfamilyng for more updates.
0 comment
0
FacebookTwitterPinterestEmail