For Mrs. Maria Odeh, a 2004 Theatre Arts graduate of Benue State University, her joy overflowed when she got married to her 37-year-old heartthrob, Joseph Odeh in April, 2007, shortly after completion of the mandatory national youth service scheme.

She met her hubby in Kano, where she was deployed for the programme, and was consumed by a sizzling love affair which transformed to marriage in no distant time. As she signed the dotted lines on the altar, thoughts of an uninterrupted and lively union overwhelmed her, as she danced to the glory of God for giving her a man of her dreams.

That was the situation for several years as the couple settled down at Akwanga, Nasarawa State, and Maria professed her husband’s true love to friends and relations at any opportunity. Her only worry was that she is unable to bear a child, years after their marriage. The couple had sought medical help at the General Hospital, Akwanga, where Joseph was said to have been diagnosed of low sperm count which was treated and normalized in three months.

Maria said though doctors certified her reproductive organs okay after conducting series of tests, she was unable to conceive thereafter. Her consolation, however, was that her spouse did not betray signs of desperation and frustration as the search for the fruit of the womb continued.

However, indications that her luck had been stretched to the limits manifested seven years into the marriage, but she least expected the events that unfolded. “About three years back, precisely towards the end of 2013, my husband suddenly lost interest in me. Whenever I touched him at night, he gave me one complaint or another. It is either he is tired or not in the mood”, she recalled in an interview with Saturday Sun.

Unknown to her, Joseph was engaged in a secret romance with Joy Agbo, her 24-year-old younger sister who she relocated earlier in the year from her village in Ogbadibo Local Government Area of Benue State to live with them at Akwanga. In her determination to ensure she played her expected role after the demise of their mother, Maria secured admission for her sibling at the College of Education, Akwanga, to study Business Education.

Unfortunately, rather than concentrate on her studies, Joy indulged in illicit sexual affair with her sisters’ hubby. She was away from home daily from dawn to dusk, having secured a job with Patriotic Health Organization, a non-governmental outfit. She had been unemployed for several years, during which she sold second-hand clothes.

Last month, Maria was jolted to the realisation that her beloved husband had betrayed the love and trust she invested in him by not only having an affair with Joy, but also impregnating her. To worsen matters, her husband is resolute on marrying her younger sister, and has shown her a red card if she is unwilling to accept his weird idea. 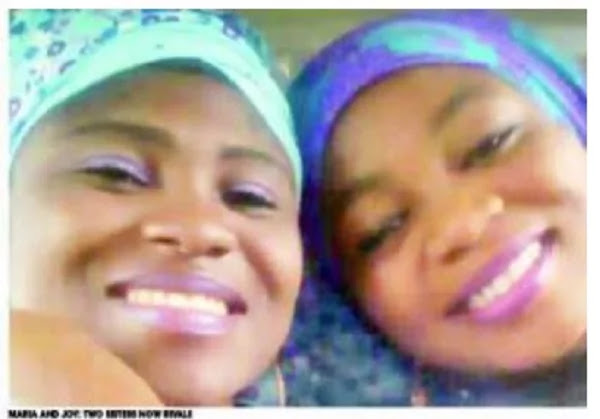 “In August 2016, I got a job with an NGO as secretary and most times, had to leave home very early in the morning for either Keffi or Lafia, as the job demanded, and closed late by 7.pm. I didn’t know how it happened, but in June this year, I noticed that my younger sister’s breasts increased in size and she looked very heavy. On a close examination, I discovered she was four months pregnant and when I probed further, she told me Joe was responsible for it. I asked her which Joe? She said your own Joe, my husband, but I did not believe it. When I confronted my husband at night, he confirmed it and went ahead to tell me he would marry her; he said if I can’t tolerate it, I should pack my belongings and go. I screamed and cried, and almost died of shock; I immediately called my people on phone and told them what has happened”, she said, sobbing.

Maria says the situation threw her into confusion on her inability to conceive for her husband, more so, as doctors had certified her fertile, and she had no cause to discreetly seek proof through an extra marital affair. “Even my people are as confused as I am; they keep calling me to ask what I wanted to do. After wide consultations with my friends, I am considering divorce. But I will re-marry if I find a genuine person, I can’t stay alone; I need a gentle man to settle down. I will soon file a divorce suit so that I can start a new life; I will definitely remarry if an honest man comes my way, though I won’t be in a hurry,” she said.

While Maria is traumatized, her husband has no qualms even as he pointed at the devil for committing the act, which in another breathe, he described as divine. Last week, Joseph affirmed his resolve to marry his sister-in-law in a chat with our correspondent. “I have told my wife that I am responsible for the pregnancy of her sister, and now that she is pregnant for me, she cannot abort it, though it was the devil’s work; if she is not comfortable with it, she can go. We have been married for 10 years, no child; if her people want me to pay the pride price for Joy, I will do it. It is unfortunate, but that is the reality. I’m not a womanizer; I don’t drink beer, ask my friends. I don’t keep girlfriends outside; I don’t know how it happened, but my affair with Joy is divine intervention”, he emphasized.

But his father-in-law, Clement Agbo, has declared his unwillingness to dine with the devil, not even with a long spoon. “We are not in support of what happened, and cannot collect bride price again, from him. I lack words to express my feelings, but I have asked Maria to file a divorce suit; she can’t stay in that house again. For me, I have disowned Joy; she is no longer my daughter. If their mother was alive, she would have supported my position. What Joy and Joseph did is an abomination in our tradition; let them stay together. It is only God that will resolve this shameful matter”, he told Saturday Sun on telephone.

How it happened – Joy

Like Joseph, Joy is also unperturbed over the incident, and is prepared for the worst. “I deeply sympathise with my sister, but Joe told me not to worry about anything, that the issue will be resolved. Since my sister is ready to divorce him, I will keep the pregnancy”, she said, as she gave a blow-by-blow account of how it all happened. Hear her:

“It started precisely on February 17, this year. That afternoon, when my sister had gone to work and her husband came home from his shop to pick up some items. I was sleeping in the sitting room, and because I was not expecting any of them to return home soon, I didn’t put on pants and my chest was open; in fact I was Unclad because I was feeling hot. I suddenly slept off, but forgot to lock the entrance door and Joe came in unexpectedly.

Though I was asleep I guess when he saw me Unclad, he must have been moved to a point that he couldn’t control his libido. Before I realised it, he was already on me with his lip on my breast; my efforts to push him off me failed, and he had sex with me. Before then, he used to take me out to supermarkets, and fast food spots; we became very close, but he never approached me and I didn’t expect such from him, though he kept telling me he was desperate to talk with me.

After that afternoon sex, he knelt down and begged me not to tell anybody; he said it was the devil’s work, but I cried and vowed to tell my sister when she returned; he begged me and promise not to do it again. That day, he gave me N20, 000 for my shopping, and I promised him I wouldn’t tell anybody about what happened.

I don’t know what came over me, as if it was a dream. A few days after, he invited me for an outing and somehow, convinced me and we started making love regularly, as if it was a charm. We were madly in love, and he bought a mobile phone worth N40, 000 for me. At night when he is in his room with his wife, I will be chatting with him from my room; somehow, I became pregnant for him.

I do not intend to abort the pregnancy because the harm has already been done; I apologised to my sister, but she doesn’t talk to with me any longer. I don’t know what is on her mind, but for me, I will deliver the baby and further my education to the university. I deeply sympathise with my sister, but Joe told me not to worry about anything, that the issue will be resolved. Since my sister is ready to divorce him, I will keep the pregnancy; my people are not in support of what I’m doing but they have no choice. It is not my wish, but that is the reality. For me, I love Joseph because he is caring and lovely”.

To be sure, these are trying times for Maria as darkness and despondency set into her once blissful marriage. Things are no longer at ease with her, Joe and her younger sister, Joy. Enveloped in a cloud of uncertainty, she spoke of her moments of joy with Joseph, who also hails from Benue, her home state. Both are of Idoma extraction.

“After my four year programme in the university, I was posted to Kano State for my NYSC, where Joseph who had earlier completed his service and was working as farm manager at Wodi Farms where he served and was retained. I fell in love with him, because he has a charming personality; he exuded an air of confidence, and his poise was breathtaking. He swept me off my feet right from the first day I met him at a market in Kano. We became lovers and our days of beautiful romance were the happiest moments of my life; I was on top of the world and really acted like a girl in love. I married him and was the happiest woman on earth; I love him and he loved me too, but suddenly, all that crashed in one irrational moment”, she lamented. Sad!

6 Things you must put in place before marriage

I Found My Death Certificate in My...