A 53-year-old woman, Samantha Chiumbo, who came to nurse her daughter’s newborn baby with her was recently caught in bed with her son-in-law in the Kamba community in Tsavo Area of Kenya. 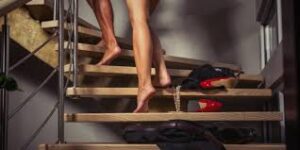 The Kenyan woman who said she has never slept with any man for the past 18 years, after her husband’s death, blamed lack of sex for the cause of her misconduct and lamented that she did not know what came over her.

“I can’t say what really came over me, I just couldn’t control myself after seeing my son-in-law’s nakedness that evening. I have not been with any other man since my husband’s death 18 years ago. This is a shameful thing that I have done. Can my daughter ever forgive me?”

According to the wife and daughter of the woman, Durah Ashura “I caught my husband naked with my mother in his room as I arrived from the market that evening.” I never thought he could lure my mother too, but I’ve always known him to be promiscuous.”

Speaking with the husband and father of two; Ashura, he said the mother-in-law threatened to expose him if he refused to have sex with her, noting that the woman had caught him with their housemaid before.

However, the wife has filed a case in the court seeking a divorce, stressing that she cannot continue with a man that has slept with her mother.

The couple is to appear before a magistrate court in Marimanti on the 2nd of October for hearing.

Meanwhile, the mother-in-law has left the couple’s house and her whereabouts is still unknown.

15 Things every parent must know as school resumes

Boy Commits Suicide …his reason for it...