A six-year-old girl has been allegedly raped by a 32-year-old newly married man, Francis Azukwo in Ikotun area of Lagos State. 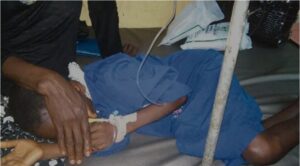 You can also read this: Arabic teacher remands in prison over alleged defilement of female student

Francis Azukwo, who was arrested following the incident was said to have allegedly penetrated the victim’s private part and anus while committing the sexual assault.

Joy, the victim’s mother and Azukwo were reported to have lived as tenants in the same house for some time.

The mother of the victim, Joy was delivering a baby in the hospital when the incident occurred as she left the six-year-old with her 16-year-old cousin.

Joy found out some strange movements in her six-year-old girl after she returned from the hospital and later discovered bruises in her private part after a careful examination.

The girl told her mother when she inquired that Francis defiled her. It was confirmed that the little girl was penetrated and that her hymen was broken at Mirabel Centre, Lagos State University Teaching Hospital, Ikeja where she was taken for an examination after the matter was reported to the police.

The suspect, Francis, however, denied the allegations on his arrest and was arraigned before the Ogba Magistrate court on two counts of defilement and indecent assault on the 10th of January 2018.

The magistrate, Ojo, admitted the defendant to bail in the sum of N400,000 with two sureties in like sum.

You can also read this: 9 ways to protect your girl-child from defilement

Return Nigeria Back to the Way It...

No Admission For Students With Tattoos-VC