A 38-year old Ajibade Rasheed has been arrested by the Osun State Police Command, for being in possession of fresh human parts in Osogbo, the state capital.

Ajibade was paraded by the Commissioner of Police in the state, Mr Fimihan Adeoye at the command headquarters.

The commission said Ajibade was apprehended at Olu-Ode area with the fresh head of a woman, intestine, lung, vagina, liver and a bottle containing blood, all inside his car with registration no: LSD 987 DJ. 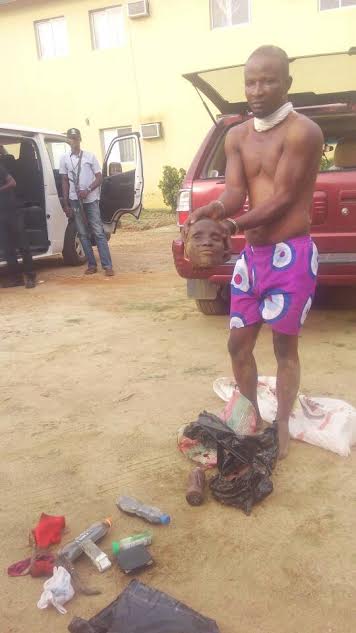 However, concerning the identity of the victim Adeoye said investigation has commenced identify the victim.

“A female head, two human palms, livers, lungs, intestines, vagina and some charms were found in his possession. A bottle filled with a red liquid substance suspected to be blood was also found in his possession. We are working on getting the identity of the victim. On the completion of our investigation, the suspect will be prosecuted accordingly” he said

NIGERIANS REACT AS NORTHERN YOUTHS SACKS IGBOS FROM THE NORTH

Man in Police net for killing his wife over N2,000 Feeding allowance

Meet the school girls that want to...