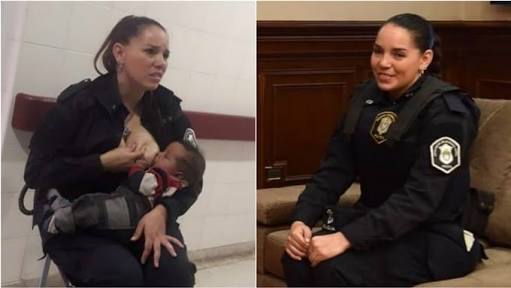 A female police officer in Argentina has been promoted by the authorities after she was seen breastfeeding a baby that was abandoned.

The female police officer, Celeste Ayala, who is also nursing her own daughter at the moment asked at the hospital if she can breastfeed the baby who refused to stop crying.

According to New York Times, the baby, which is the youngest of six sibling refuses to stop crying, which led the police officer to suggest breastfeeding the baby.

Speaking at a Argentina show, Cronica, Celeste Ayala said “I didn’t doubt it for a second,” “So I pulled out my breast and he became calm.”

Celeste Ayala was, among other police officers who took into state custody six siblings due to their extremely poor condition in a city near Buenos Aires, Argentina.

Celeste Ayala’s photo while breastfeeding the baby was posted on Facebook by her colleague, Marcos Heredia. He wrote: “I want to make public this great gesture of love you had with this baby, whom you treated like a mother without a second thought, even though you didn’t know him.”

Ayala has been promoted to the level of a Sergeant by the Minister of Security for the Province of Buenos Aires.