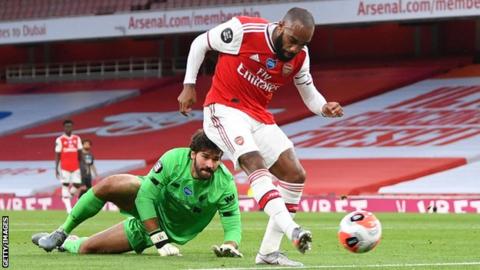 Alexandre Lacazette and Reiss Nelson were the beneficiaries of misplaced passes from Van Dijk and Alisson as Arsenal kept their chances of European football next season alive by moving up to ninth and within two points of Tottenham.

Arsenal boss Mikel Arteta’s mind appeared to be already focused on Saturday’s FA Cup semi-final against his former side Manchester City as he left top scorer Pierre-Emerick Aubameyang on the bench among five changes from defeat in the north London derby to Spurs.

Liverpool, by contrast, were at full strength bar the absence of injured captain Jordan Henderson and it showed for the first half an hour as the visitors’ dominated.

Arsenal goalkeeper Emiliano Martinez was lucky to escape when his clearance was charged down by Roberto Firmino and came off the outside of the post.

Liverpool deservedly took the lead in the 20th minute with a slick move as Andy Robertson provided his 10th assist in the Premier League this season with a low cross that was met on the stretch by Sadio Mane.

However, the champions have now won just three of their seven matches since the Premier League’s restart and turned a well-earned lead into a half-time deficit due two moments of slackness that were extremely rare on their march towards a first title in 30 years prior to the shutdown.

Van Dijk was at fault for the equaliser as his loose pass back towards Alisson was pounced on by Lacazette who rounded the goalkeeper before finishing his third goal in four games.

That was only the world’s most expensive defender’s second error leading to a goal in 88 Premier League games since his £75 million move from Southampton in January 2018.

The signings of Van Dijk and Alisson transformed Liverpool’s defensive record under Klopp, but the Brazilian then followed his centre-back’s example by gifting away possession to Lacazette and the Frenchman’s cross was dispatched by Nelson.

Liverpool were camped in Arsenal’s half for the second 45 minutes, but found it difficult to breakdown the Gunners as they were happy to sit deep and defend the lead.

Mohamed Salah had opportunities to move level with Aubameyang on 20 Premier League goals in the chase of Jamie Vardy at the top of the standings for the Golden Boot.

The Egypt forward’s first effort was tipped over by Martinez before he headed straight at the Argentine from Mane’s inviting cross.

Firmino and Salah were then substituted in a sign of an off night for two-thirds of Liverpool’s front three.

Mane remained the major danger but he slid the best chance for an equaliser wide late on and with that opportunity went Liverpool’s chance of reaching a century of points.