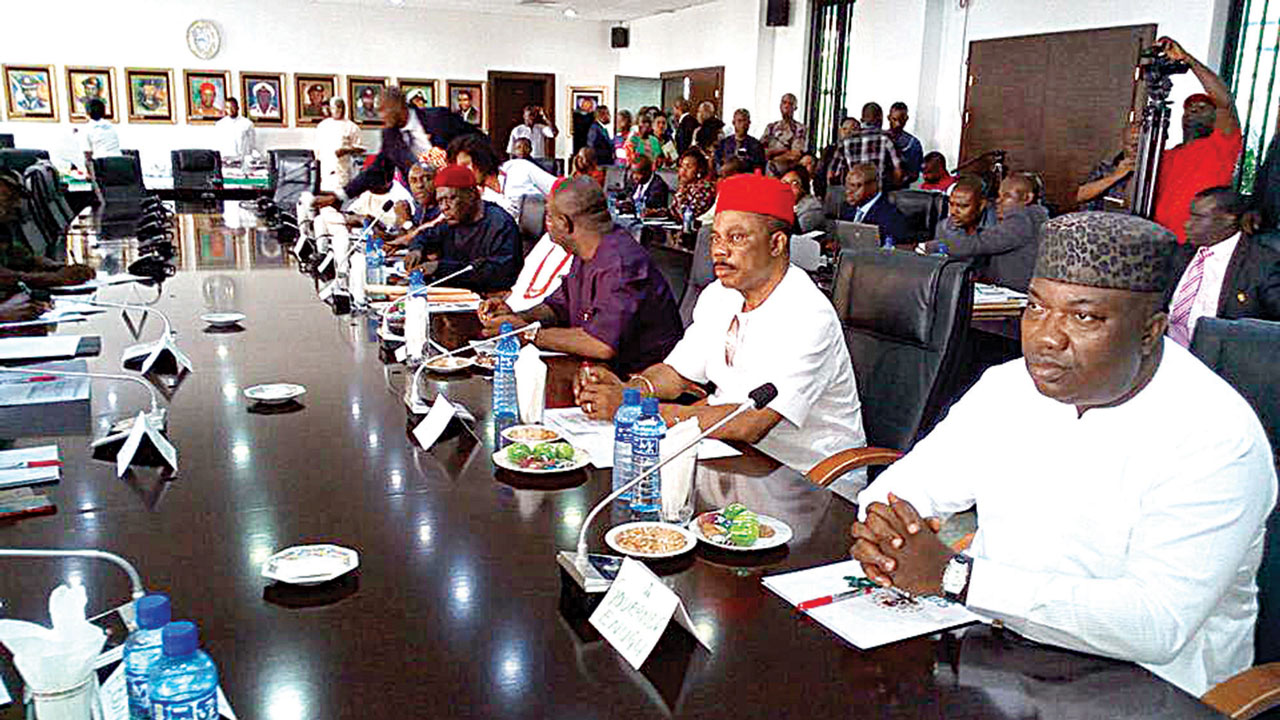 On Saturday, the Leaders of the South-East geo-political zone comprising the governors of the five states, members of the National Assembly, Ministers, Speakers of the State Houses of Assembly, the Clergy and Traditional Rulers, rose from a closed-door meeting at the Government House, Enugu, urging leaders of other geo-political zones in the country to protect Igbos living in their regions.

The South-East leaders who made the request in view of what they described as “threats by some groups against our people”, promised to protect everyone, including Igbos and people from other regions, residing in the zone.

In a communiqué read by the Governor of Ebonyi State and Chairman of South East Governors’ Forum, Engr. David Umahi, the leaders of the zone reiterated their “commitment to one united Nigeria under a platform of justice, equality of rights, fairness, love and respect for one another”.

The communiqué disclosed that the meeting consequently “set up committees under Ohaneze Ndigbo to articulate and address our positions on all burning issues to further meet among ourselves and thereafter meet with the Presidential team”.

It added that South-East leaders also condemned the killing of security agents, burning of strategic infrastructure and killing of civilians in South East and in other regions, and requested the security agencies to discharge their duties within the rules of engagement and the law.

The South-East leaders also condemned in totality, the activities of violent secessionist groups in the zone and elsewhere, proclaiming firmly that “we do not support them, they do not speak for South-East”.

On the impression that South-East leaders are silent over agitations for secession by some youths of the region, they stated that “is not correct”, stressing that “South-East Governors, Ohaneze President, National Assembly members, the notable leader had come out publicly many times in the past to speak against such agitations”.

The communiqué revealed that South-East leaders, in order not to mismanage the unfortunate situation, “have set up a committee to engage such youths to stop and allow elders speak to address such fears”.

Regarding the safety of the Igbo indigenes in other parts of the country and the newly established regional security outfit, etc, the communiqué added that the “meeting directed our Governors and Ohaneze Ndigbo to liaise with indigenes from the northern part of Nigeria and indigenes of other regions to assure that the nation, Nigeria, and their people of their safety in South East.

“The meeting endorsed our South East joint security outfit – Ebubeagu and asked them to work with security agencies and to respect the rights and privileges of all those living in the South East and our visitors.

“We request our National Assembly from the South East to support State Police creation in the ongoing constitutional amendment.”

The Committees set up, according to the communiqué, are “Agitation; engagement with other regions; those of our people in the North, South East, South-South and South-West; IPOB, MASSOB, Youths and Market people, Okada and Keke; Diaspora; Advocacy; and Diplomatic engagement with Foreign Missions”.

Popular Boxer Finds Out He Is Not...