It was reported earlier that the controversial ‘Dot nation’ phrase became popular following President Muhammadu Buhari’s recent interview with Arise TV, where he described those from South-East agitating for secession as “a dot in a circle” who would not have anywhere to run to should they secede from Nigeria.

The ‘dot nation t-shirt’ referring to President Buhari’s press release where he called the IPOB movement a ‘Dot in a circle, they can’t fit anywhere.”

Igbokwe reacted to the viral photos of Abaribe wearing the t-shirt then accused the latter of being a “bigot and an elder for nothing“. He further stated that the blood of those policemen and young people killed in the South-East will be accounted for in the fullness of time.

“A Senator and an ethnic bigot, an elder for nothing. The blood of those policemen and the uninformed youths killed in the South-East will be accounted for in the fullness of time, We cannot be madIgbokwe also described Abaribe as “IPOB’s father” and an “elder who is a snake of soup”. He further added;

“Father of the IPOB people. An elder is a snake of soup. Take care of yourself. All the time.” 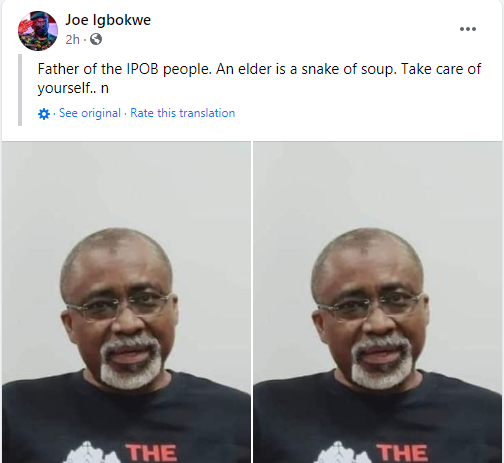