President Muhammadu Buhari was on Thursday moved to tears by the devastation caused by the fire incident that gutted no fewer than 750 shops in the central market in Azare, Bauchi state. 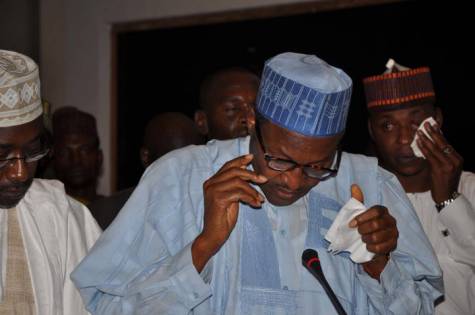 Buhari, who visited the state, said he was in Azare to see things for himself and assess the damages suffered by traders in the area.

He said, “I am here to personally sympathise with traders in Azare in the aftermath of the unfortunate fire incident in the market last week,” he said.

The President noted that the fire incident was a natural disaster, and expressed federal government’s sympathy for the victims.

He assured that the federal government will critically look into the matter through NEMA with a view to assisting the victims.

“Federal Government is committed to economic development and the market fire disaster is a great setback to our genuine commitment to economic recovery,” Buhari added.

Buhari had visited the scene of the fire disaster to personally ascertain the level of damages done to the market.

According to them, the president’s visit demonstrates his concern to citizenry of the state especially victims of fire disaster in Azare market.

” We crave the indulgence of President Buhari to redouble federal government’s efforts to get rid of criminals along Azare -Potiskum road as activities of armed robbers is now a serious concern,” said the Emir.

It would be recalled that President Buhari had during his last visit stated that Bauchi state remains his second home, against the backdrop of the mammoth support he enjoyed from the state in the 2015 election that brought him to power.

Woman begs for mercy, as angry mob attack her

Shocking: Priest Slaps Baby Because Of Uncontrollable Crying…see what the parents did(Video)