The governors declared that the violent secessionist groups do not represent their region. 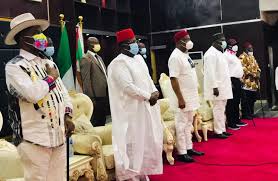 The governors stated that in a communique released on Saturday, June 19, 2021, after a meeting in Enugu state.

Recently, there have been series of attacks on public/government facilities in the region.

The attacks led to the killing of civilians and security operatives in the region especially in Imo state.

The police, army and other security agencies have accused the Indigenous People of Biafra (IPOB) of been behind the attacks, but the group has repeatedly denied carrying out any attacks.

However, in its communique on Saturday, the South-east governor’s forum condemned the killing of civilians, security agents and the burning of strategic infrastructure in South-east and other regions.

The governors stated that the violent secessionists do not speak for their region.

“We condemn in totality, the activities of violent secessionist groups in the South-east and elsewhere. We firmly proclaim that we do not support them, they do not speak for the South-east. The impression that south-east leaders are silent over some of our youths agitators for secession is not correct.

“South-east governors, Ohaneze president, national assembly members, notable leaders had come out publicly many times in the past to speak against such agitations. In order not to mismanage the unfortunate situation, South-east leaders have set up a committee to engage such youths to stop and allow elders speak to address such fears,” the communique reads in part.

The governors expressed that they are committed to a united Nigeria and also pleaded with the leaders of other regions to protect Igbos in their territories.

“We, the Igbo, do reaffirm our commitment to one united Nigeria under a platform of justice, equality of rights, fairness, love and respect for one another.

The governors also called on national assembly members from the South-east to support the creation of state police in the ongoing constitutional amendment.

15 Health tips from Cristiano Ronaldo we should emulate

Lovers who stayed together for 6 years...