The residents of Umahia, who have been living fear-stricken lives during this period of insecurity and violence in the state of Abia, have placed a ‘juju’ fetish object in front of a Police Area Command to chase off unknown gunmen. 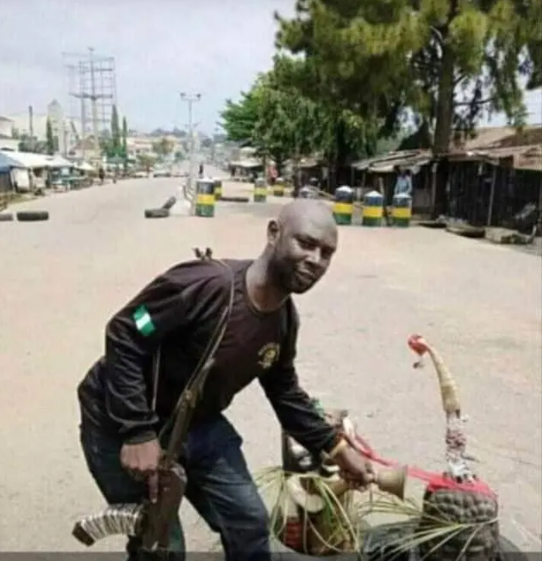 Unbelievable! ‘Juju’ put in front of Police station in Abia to chase off ‘unknown gunmen’

The object which was believed to possess powers to chase off or prevent attacks from unknown gunmen was placed on the 22nd of June, 2021.
A correspondent in the state reported that the ‘juju’ object was placed in an area restricted to human and vehicular movements.
Sources gathered, show that some residents who discussed whispery tones, said it was placed there to protect security operatives of the area from attacks from “unknown gunmen”.
Abia is one of the southeast states where unknown gunmen have launched attacks on security formations.

“Around evening time on Monday, we saw some people in a bus approach the police station, shoot the gate open, killing all the six officials who tried to resist them.” That was how one eye witness account narrated the dare-devil attack on a police facility in Imo State that happened on Monday. Meanwhile, in the nearby city of Port Harcourt, Rivers State, five security officers, including two soldiers, were also murdered in cold blood around that same time.

According to a PREMIUM TIMES report, between February and March, in a space of just some months, at least 10 police officers were killed and six police stations razed in a wave of attacks targeting security forces in the South-East and South-South regions of Nigeria.

Woman fakes her own kidnapping to collect...