Home » Unbelievable! See Dog Who Has Been Waiting By His Owner’s Grave For 10 Years
All postsweird news

Unbelievable! See Dog Who Has Been Waiting By His Owner’s Grave For 10 Years

Unbelievable! See Dog Who Has Been Waiting By His Owner’s Grave For 10 Years

Capitan has demonstrated unusual loyalty to his Master who died ten years ago by waiting by his grave in the last ten years. Unbelievable! See Dog Who Has Been Waiting By His Owner’s Grave For 10 Years

According to odditycentral.com,It’s been five years since we featured the touching story of Capitan, a loyal German shepherd who refused to leave the side of his owner, even though he had been dead for nearly six years. Well, believe it or not, the old dog still spends his days waiting by his deceased owner’s grave, 10 years after he passed. Unbelievable! See Dog Who Has Been Waiting By His Owner’s Grave For 10 Years

Capitan’s undying loyalty for his master first made headlines in 2012, when local papers in the Argentinian town of Villa Carlos Paz reported that the dog spent every day waiting by the grave of his owner, Miguel Guzmán, who had died in 2006. The dog disappeared from the family home a few months later, and Guzmán’s widow, Veronica, was shocked to find him by her late husband’s grave, when she went to visit him at the cemetery. She and her son, Damian, tried taking him home several times, but he always ran back to be by Miguel’s side. Eventually, they understood that nothing they did could ever fill the void in Capitan’s heart, so they let him be with his beloved master. Unbelievable! See Dog Who Has Been Waiting By His Owner’s Grave For 10 Years

Over the years, Capitan won the affection and respect of cemetery caretakers, who made sure that he was well-fed and vaccinated every year, but time has taken a toll on the aging canine. He is 15-year-old now, has lost his sight almost completely and can barely walk, but he still stands by his owner’s grave, as if waiting for the day when they will finally be reunited. He is still being taken care of, and receives medical attention when he needs it, but there is no antidote for time.

“We have no idea how he found the tomb because his owner did not die in Carlos Paz, but in Cordoba,” Héctor Banegas, a retired caretaker at Carlos Paz Cemetery, recently told La Opinion. “From there he was transferred to the village for the wake and from there directly to the cemetery, he did not return to his house and he did not see the dog again.” 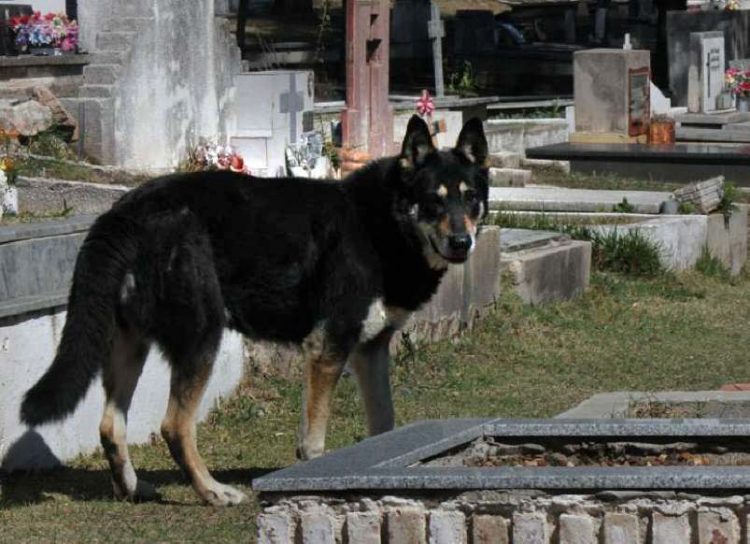 “The big mystery is how Capitan didn’t forget the scent of his master’s scent for months after his death,” Banegas added. “I think he just sensed his spirit, that there was some communication between them that led him to the grave.”

Aldo Cecchi, a canine trainer for more than 25 years, recently told Cadena 3 that Capitan’s story is proof that dogs are linked to their owner’s energy. “Dogs detect electormagnetic changes and sound waves. If Captain intertwined his morphic field with that of his master, he was able to find the place he was buried in.”

Whatever explanation you’re comfortable with, one thing is for sure – Capitan is living proof of the loyalty canines are capable of towards their human masters. 10 years is basically a lifetime for some dogs, and he spent all that time waiting by his owner’s grave, hoping they would be together again one day.

The comment I posted in the first article about Capitan, five years ago, seems even more relevant today –  “A wait that lasts a lifetime. Cruel is the fate that allows a creature to yearn reunion but yet not understand the mortality which separates them.”

People you will meet in camp during orientation camping

Incredible: Mother bath, feeds grown up daughter on her birthday

7 ways to prepare for Marriage