What Osinbajo Told LinkedIn Founder Will Leave You Speechless

What Osinbajo Told LinkedIn Founder Will Leave You Speechless

Vice President, Professor Yemi Osinbajo engaged in a fireside chat with Mr.Allen Blue, Co-Founder of LinkedIn and he assured him that Nigeria was open to business.

According to news agency of Nigeria, Osinbajo arrived in California where he will be headlining a number of investment forums in the San Francisco area and Los Angeles, promoting tech innovation and entertainment industries.

Osinbajo had arrived in California where he would be headlining a number of investment forums in the San Francisco area and Los Angeles.

He is currently promoting technology innovation and entertainment industries.

According to his spokesman, Mr. Laolu Akande, he is accompanied by many from those sectors and relevant top government officials.

In series of tweets, Akande said the Vice President taking questions from the audience at the LinkedIn Fireside Chat. It’s a full audience.

He quoted Osinbajo as saying: “We may not have the kind of classrooms as we have today considering the growth rate of Nigeria’s population, so technology may become the way out to take education and learning forward.’’

Talking about how to draw and retain talents for technology, Osinbajo said that naturally “talent will follow the money.”

He adds that the right environment also has to be created, providing infrastructure support to the entrepreneurs and businesses

“We are thinking of how to partner more with technology companies’’ and he referred to NPower with 200,000 beneficiaries and the opportunities for digital training for large number of people

Commending the opportunities in agriculture, he said: “Quite a few people are looking in the direction of agriculture like a big Mexican farmer in Nigeria who has found a great market in the country making more money selling in the domestic market.’’

There were over 20 important US tech related investors in the room in one of VP Osinbajo’s meetings on Tuesday in Silicon Valley, where he told them that considering the groundwork going on in the country now in tech. the 4th industrial revolution might well be a Nigerian revolution, Akande said.

VP Osinbajo was received by senior executives of Google led by its CEO Sundar Pichai, at the firm’s headquarters.

Osinbajo had also tweeted that “I am in the USA, leading a Public-Private sector collaborative investment road show. Today, I was received by senior executives of Google led by its CEO, Sundar Pichai, at the firm’s Headquarters”. 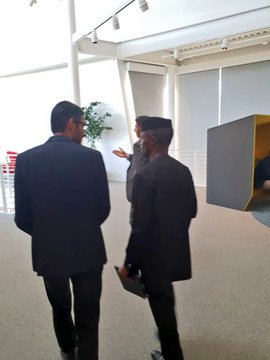 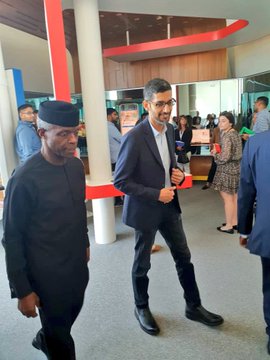 He said in his tweet that he told the meeting that “By 2050, Nigeria will have 3rd largest population in the world. We understand that we have to explore ways of delivering education outside of conventional classrooms.” 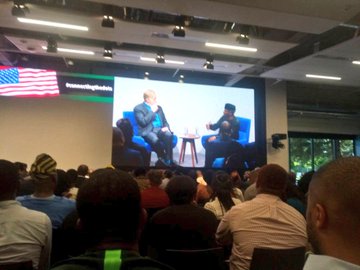 3 Laws Every Couple Must Obey To Have A Fantastic Marriage

Shocking: See What Israel Is Sending From...